This vegan lasagne is packed with veggies, mushrooms & lentils for a protein and fibre-rich meal, all whilst being comforting and easy to make.

We like to use a base of onions, carrot and celery which add a huge amount of flavour as well as bulk to the sauce. It’s important to cook these for long enough that they start to brown slightly – it takes a while (15-20 mins) but it’s SO worth it in the long run as it really sets up those deeper, meatier flavours for the ragu. This mixture is then removed from the pan and we cook the mushrooms by themselves as this gives them the space to release their liquid which can evaporate, concentrating the flavour and making the texture meatier. We then add in our balsamic vinegar, tinned tomatoes, herbs and red lentils. The dry red lentils are an amazing ingredient to have on hand as they’re cheap, quick to cook, are high in protein and fibre and add a lot of bulk to the sauce.

We stir in tinned green lentils as they’re pre-cooked and add to that ‘meaty texture’ but you can easily cook the green lentils from dry (see recipe notes) or replace with vegan mince or TVP (see sections below the recipe card).

To enhance the meaty flavour of the ragu, we turn to ingredients like marmite (even if you don’t like it on toast, PLEASE try it in a vegan ragu – it’s amazing!!) which you can also sub for vegemite or miso, depending on what you have access to. We also love adding dark soy sauce to ‘meaty’ dishes for that delicious umami flavour it brings and how easy it is to find in the supermarkets. Another secret flavour boost comes from Maggi liquid seasoning which really amps up the umami flavours. However, we know not everyone is going to be able to buy another ingredient to keep in the cupboard so it’s entirely optional.

Usually in a standard lasagne you might add cheese to your bechamel e.g. cheddar or mozzarella, or even layer cheese into the bake. We’re not a fan of most supermarket vegan cheese so, especially with a highly flavoured dish like lasagne, there’s not a huge need to replace the cheese – we just leave it out! If you miss that stretchy texture of mozzarella you can always sprinkle a few handfuls of grated vegan mozzarella alternative into the layers of the lasagne as you wish.

We like to make a very tasty bechamel sauce (i.e. a white sauce) which starts with olive oil (cheaper and more accessible than vegan butter) and some garlic (for extra flavour!). Plain flour is added and toasted briefly in the oil to remove the floury flavour then soy milk (or another non-dairy milk) is whisked in until thick. We then mix in some more flavourful ingredients – nutritional yeast (which adds a savoury note), apple cider vinegar/lemon juice (to mimic the tang of cheese), salt (very important!! Again helps to add to the ‘cheesy’ taste) and black pepper. Lastly, a bit of nutmeg in the bechamel is a classic ingredient and just adds an extra layer of flavour.

Some recipes call for using soaked, blended cashews (or other nuts) in the bechamel for a creamier texture. Whilst this is nice, it makes the recipe more hassle to make and more expensive. We find that using the flour-thickened white sauce and using plain soy milk works great to produce a creamy texture. If you want it to be creamier but don’t want to add nuts, you can also substitute 100ml of the non-dairy milk for a non-dairy cream (e.g. Elmlea plant) or you can stir in 2-3 tbsp of vegan cream cheese/soft cheese/creme fraiche alternative.

Generally, dry pasta is egg-free making suitable for vegans to consume. Just make sure you check the packaging to see what the ingredients are! On the other hand, fresh pasta usually contains eggs so, unless it says otherwise, it’s easier to avoid the fresh stuff and just stick to dried.

In the UK, I’ve tried many different lasagne sheets from different supermarkets and I’ve always had the experience that you do not need to pre-cook the lasagne sheets before layering & baking. This is because the ragu & bechamel contain enough liquid to cook the pasta while the lasagne bakes. That said, this is a good reason to make sure that your ragu sauce isn’t too dry (so don’t worry if it seems a bit watery pre-bake). The pasta will absorb the excess water as it bakes so it shouldn’t turn out watery.

Where can I buy vegan lasagne sheets? 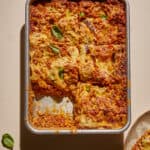 For the vegan ragu:

For the vegan bechamel:

See extra notes above/below the recipe box for if you need to replace or leave out an ingredient. *No balsamic vinegar? Add a pinch of sugar to the sauce instead – we mostly use the balsamic for its sweetness in this recipe! Using dry green lentils? Use 140g dry green lentils instead and add them to the frying pan along with the dry red lentils in step 4.

Using quorn (or another chilled/frozen veggie mince) instead of lentils

In this recipe to keep costs down, I’ve gone for using a mixture of red lentils & green lentils for that ‘mince meat’ texture. If you prefer, you can replace some or all of the lentils with a vegan mince substitute such as quorn mince. Our recommendation is that you simply don’t add the green lentils and instead add 300g vegan quorn mince (or other vegan mince) to the pot in step 3 and cook the mince alongside the mushrooms.

Using TVP (or soya mince) instead of lentils

Another alternative is to use textured vegetable protein (i.e. TVP) which is also sometimes called soya mince which comes as dry, slightly chunky granules. They need to rehydrate to be edible but you can do this by just stirring them into your ragu sauce. Our advice is to not add the green lentils and instead stir in 120g of soya mince/TVP in step 6 (i.e. when you would’ve added the green lentils). You will need to add a bit more water to the sauce to replace the liquid which the mince absorbs.

The advantage of TVP is that it’s generally a lot more cost effective than name brand mince options. It’s also got a very long shelf life, is stored at room temp and, as it is dry, will bulk up a lot more when you add to sauces so you don’t need as much by weight.

The downside is that it’s unflavoured so you want it to go into a flavourful sauce otherwise it can be bland!

This recipe is packed with a wide variety of vegetables (onion, carrot, celery, mushrooms, tomato) which is great for reaching your 5-a-day and getting a range of micronutrients and different types of fibre. It also contains lots of fibre-rich lentils (both red and green!) which also give you a boost of protein. The pasta will also provide some protein plus gives you carbohydrates for energy. You can increase the fibre content further by using dry wholewheat lasagne sheets if you wish.

How long do you cook vegan lasagne?

It takes 30-40 minutes to bake this vegan lasagne – the time is needed for the pasta to cook through and for the bechamel to start to turn golden on top.

You can replace some/all of the pasta in this lasagne recipe with thinly sliced courgette or aubergines. To do this, just remove the top & end of your chosen veg and then slice into planks about 3mm thick.

With courgette, you can layer it straight into the dish.

With aubergine, we recommend brushing the planks with a bit of olive oil on both sides and roasting in a 180°C fan oven for 10-20 minutes until golden, before layering into the dish.

How to make vegan lasagne