A classic flavour pairing – oatmeal and raisins! With extra flavour from cinnamon and nuts, and a crispy, chewy texture, these will quickly become a firm favourite to whip up for dessert.

If you don’t have all the ingredients, or have questions about the recipe, be sure to read the section below the recipe card. We’ve noted lots of different ingredient substitutions, details about why we use certain ingredients and have answers to common questions. 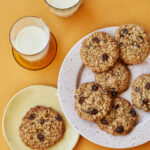 No vegan butter? You can replace the vegan butter with 80g of vegetable oil, sunflower oil, peanut oil, walnut oil or coconut oil. No treacle? Leave it out altogether OR leave it out and replace the granulated sugar with 150g light brown sugar. Aquafaba is the liquid from a can of cooked beans. We’ve successfully used the liquid from cans of chickpeas, butterbeans, kidney beans, black beans and cannellini beans in this recipe. If you don’t have any aquafaba, you can instead use:
– 1 flax egg (combine 1 tbsp ground flaxseed with 3 tbsp warm water)
– 4 tbsp unsweetened, smooth applesauce

One way you can keep your cupboards a little clearer is by using this little food hack for baking. Instead of having to store both white and brown sugar, you can just have white sugar and a tin of treacle! This way, when a recipe calls for light brown sugar, you can instead use white sugar and just mix a bit of treacle into the batter/dough as well. Using it in this way, the tin of treacle will last for AGES! And white sugar is generally cheaper than brown, so it helps in the long run to cut costs.

However, we know you may not have treacle in your cupboard and/or don’t want to buy any. The great news is that you can just use light brown sugar in the recipe below instead of white. A second option is to leave the treacle out but still use white sugar. This is also fine! The cookies will have slightly less depth of flavour but will still be delicious. We’re all for using what you already have so just do what’s easiest for you.

What type of oatmeal is best for oatmeal raisin cookies?

We ideally like to use a mix of jumbo oats (sometimes called ‘old fashioned’ oats) and rolled oats (i.e. quick oats or porridge oats). Overall, it doesn’t matter too much so just use what you have. Generally, rolled oats are cheaper so if you’re looking to keep costs down, go for those ones.

What can I use instead of raisins?

If you like oatmeal cookies but have a hatred for raisins, no problem. You can swap them out for a different dried fruit (dried cranberries are particularly nice) – if doing this just make sure you chop up any larger dried fruits like dates or figs so they mix into the batter evenly. Of course, you can also use vegan chocolate chips instead,

Can I use self-raising flour in oatmeal raisin cookies?

Can I use bicarbonate of soda instead of baking powder?

Yes. If you do this, it does slightly change the flavour of the cookies to a more toasty flavour. To make this substitution, simply replace the baking powder with 1/4 teaspoon of bicarbonate of soda (baking soda).

Can I use coconut oil in this recipe?

Can I use vegetable oil in this recipe?

The most likely answer is that they are overbaked. This causes excess moisture to evaporate from the dough as the cookies bake, leading to a harder cookie. It could also be due to leaving the dough for too long before baking – see the section ‘can you refrigerate oatmeal raisin cookie dough?‘ below.

Should you soak raisins before using in a cookie?

Yes but it’s advisable to not chill oatmeal cookie dough for too long. The oats tend to absorb much of the liquid from the dough as it sits, leading to a crumbly & dry cookie dough which doesn’t bake up very well. We advise leaving it in the fridge for no longer than 24 hours. However, for longer-term storage see below…

Yes. We prefer to freeze the pre-portioned balls of cookie dough instead of baked cookies for up to 4 months. You can just pop a couple of frozen cookie dough balls onto a tray and get them straight into the oven when a craving hits. That way you get freshly baked cookies with ease. You may need to bake them for a few minutes longer than if you were using freshly made dough, but you don’t need to defrost it before baking.

You can also of course freeze already baked cookies (for up to 3 months). Just make sure they’re in a properly sealed sandwich bag to avoid freezer burn.

Generally, no. The cookies usually contain some amount of wheat flour (which contains gluten) which helps give the cookie a thicker texture. The oats can also commonly be cross-contaminated with gluten-containing ingredients during processing so this can also make the cookies not gluten free, even if there is no wheat in them.

Some people with Coeliac disease are still sensitive to oats, even the gluten-free kind. In this case, you can replace the oats with a flaked version of a different gluten free grain e.g. quinoa flakes. the cookies will have a slightly different texture and flavour.

Making oatmeal raisin cookies from scratch is very easy and the dough comes together quite quickly.